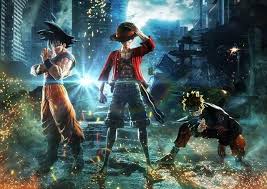 Jump Force is a tag-team fighting game that has a massive character list consisting of manga anthology with a roster offering symbols form Dragon Ball Z, Yu-Gi-Oh, Bleach and others. The game features 3D stages, and 3v3 battles and players fight in scenes inspired by real-world locations such as Hong Kong, New York, San Francisco and the Himeji Castle. Fights also take place in a series of specific strings and each team shares a bar that measures health.

The game try’s to up the anime as it is its 50th anniversary this year and with the release of Jump Force scheduled for December 2018, several characters from Black Clover and the Rurouni Keshin series have been added as well as quite a few more DBZ icons.

Bleach characters include Rukia Kuchiki, Ichigo Kurasaki and Sosuke Aizen, while the Saint Seiya offer Pegasus Seiya and Dragon Shiryu, as well as the Yugi Moto, are added with the Duel Monsters Dark Magician, Slifer the Sky Dragon and Dark Magician Girl.

Dragon Ball characters include Frieza, Goku, Piccolo, Vegeta and Cell, while the Fist of the North Star is Kenshiro plus the City Hunter is Ryo Saeba.

Rurouni Kenshin features characters such as Himura Kenshin and Shishio Makoto, with Black Clover including Asta. As for the original characters by Akira Toriyama for Jump Force exclusively players can look forward to Kane, Galena, Glover and Navigator. In October of this year, two characters were added from Saint Seiya plus 22 villains and heroes from eight the Weekly Shonen series not including Light Yagami, from Death Note.

The upcoming fighting-style game titled Jump Force is a Spike Chunsoft creation released by Bandai Namco Entertainment offering a wide variety of manga characters offered by the weekly Shonen Jump anthology. Scheduled for release in February of 2019 the game can be played on Xbox One, PlayStation 4 and Windows. Players can create unique characters with customised outfits and accessories can be earned via gameplay.

Unite in Jump Force to Fight

It is the first time that the most famous of all the manga heroes appear in a new battleground and unite to fight the most dangerous of all threats. Participants will have the fate of the entire human race in their hands as they fight.

Jump Force celebrates the 50th anniversary of the world-famous weekly Jump magazine and also the latest technologies that bring new life to characters in a new form that offers realistic designs, never seen before in gaming.