Gaming has undergone a significant breakthrough in the last two decades, with virtual reality adding the realism to games, that make them immersive. 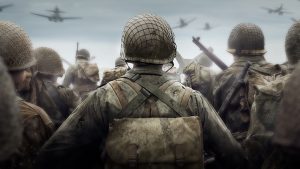 Call of Duty WWII, released in 2017, is a popular shooter game. This is a first-person shooter video game, which was developed by Sledgehammer Games, and published by Activision. The game centres around a squad which plays out in the Second European War atmosphere. The squad, from the 1st Division, play out their battles on the Western Front; the game is set on the actual historical events which took place.

A big favourite with gamers everywhere is PlayerUnknown’s Battlegrounds (PUBG), which has garnered millions of players and followers, since its release in 2017. Developed by PUBG Corporation, the game took off like wildfire, and is ranked with the best of popular online shooter games. Its sheer virtual reality world allows up to a hundred players to land on an island, by parachute. They then need to find weapons, and also equipment. To stay alive, they have to kill others, making it a real survival of the fittest game.

PUBG is a tremendously immersive game, and there are forums, YouTube videos, and whole communities, dedicated to online gaming. It really is in a world of its own, as gamers can play for hours and hours, as is seen in the gaming tournaments hosted worldwide. These, of course, are viewable on YouTube too, and aspects of any of the games can be learnt there also. Gaming is wildly popular with a whole community worldwide, who wait to play these games, and avidly support each new game that is released. Creative industries rely on new talent, to furnish new ideas for the games, to progress and cater to varying demographics. With the technology applied and the information available to help young gamers still at school, this should not be an impossible mission for them.